How the Community Garden started 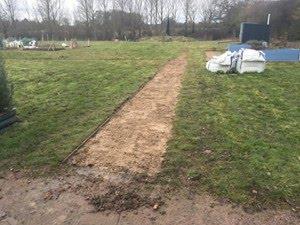 In 2015  we were allocated a plot of land at the Highfield park by Community Development Agency Herts (CDA) and  few days early a long time very active member of our Tiffin Club had passed away her name was Habiba Anchawan. After a discussion with the HAWA committee it was agreed that we will develop the plot into a garden named after Habiba. 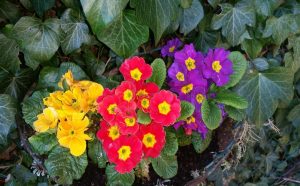 With the help of Farah and Collin Everitt who designs the initial layout the garden, as well as taking into account of our elderly ladies needs it was decided that we would make two raised beds with a diamond shape in the middle in which roses from Habiba garden were brought by her daughter Mubin, Gul and Rrafina. Qver the months lots of people came forward to volunteer in creating this peaceful space. We developed one raised bed into international herbs and the other into a variety of flower beds. It’s really exciting to see the project progressing from a patch of grass into a beautiful space created for everyone to enjoy.  We had the official opening of the “Habiba Garden” by Daisy Cooper then Liberal Democrats’ parliamentary candidate for St.Albans in 2017 and all the Tiffin Club members were at the opening. It has taken a great deal of time to create for which we are grateful for the support from the People’s Health Trust, CDA and Waitrose who have generously contributed to enable us to continue the project each year .The financial support helps us continue and develop this further and big thanks goes to all the volunteers who have given their time to help us create this peaceful space.

This was the 2018 Sustainable St.Albans Week.

Rafina and Farhat demonstrated and shared with people how to grow herbs and how to use them in Asian dishes. 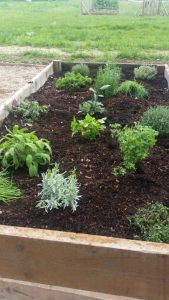 Coriander, also known as Chinese parsley, the stems and leaves of which are usually called cilantro in North America, is an annual herb in the family Apiaceae. All parts of the plant are edible, but the fresh leaves and the dried seeds are the parts most traditionally used in cooking.

It should take around three weeks for the plants to germinate, make sure to water them often, and ensure that they never dry out. Coriander prefers full sun with some shade during the hottest part of the day. Coriander is not a heavy feeder like basil, meaning that so long as the soil is in good condition, it should grow well. One of the tricks is soak the seed overnight before you sow them.

The chili pepper is the fruit of plants from the genus Capsicum which are members of the nightshade family, Chili peppers are widely used in many cuisines as a spice to add heat to dishes.

Chili peppers can be started off from seed sown indoors from late winter until the middle of spring. Fill a 10cm (4in) pot with good quality seed compost, flatten it down to leave a level surface, then sow a few seeds on top. Most seeds will germinate, so only sow a few more than you need in case of losses.

Help and Assistance during Isolation

Help and Assistance during Isolation

Exercise with Rubina on Skype